I was rather confused about the exercises in this stage and spent a lot of time reading and re-reading the manual/ I felt that I had already completed the relevant stitiching exercises in Stage 4 so in the end decided to practice my stitiches in working on some samples related to some of my drawings. Using some drawings previously developed from other drawings in pencil/black felt pen, I reworked these studies, adding some colour (using the original drawings but concentrating on just a small area).

I chose some hessian to work on as I thought this would enable me to use a greater range of yarns, including string and hemp yarn.  I found though that it made certain stitches such as french knots rathe difficult. 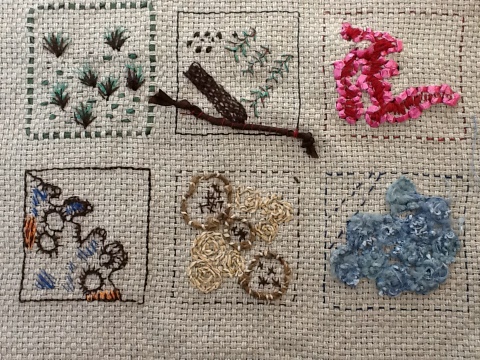 I used some green raffia to outline this piece and als0 to add some texture to the ‘grass’.  The grass was represented by brown and green embroidery thread.  I think this represented the sketch well.

For this sample, I used chain stitch and couched some brown fabric.  I used some sedding rathe than french knots.

I used pink string for an outline and then used satin stitch and red embroidery thread for texture and was pleased with the way this one worked – the string had a nice reflective quality.

A mixture of blanket stitch, sedding and satin stitch was used here to portray the different textures. 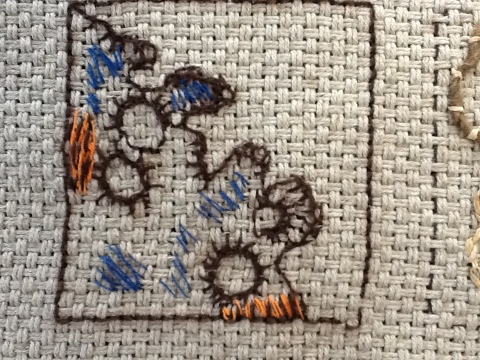 I particularly enjoyed this piece and like the knobbly texture ad contrast between the two types of hemp yarn.

The blue knobbly woo which had different yarns included in it, was pleasing to use  and I think it made a good representation of my sketch. 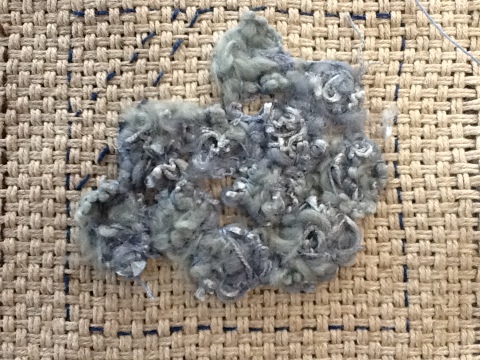