Stage 3 Selecting from your drawings

Stage 3 Selecting from your drawings

As suggested in the manual, I laid out my previous work and sketchbook work, looking for interesting arrangements, with the aid of a viewing frame. In my sketchbook, I have been doing lots of doodling, inspired by some of the Japanese prints I see around me. I was particularly influenced by a Katagami (Japanese stencil) exhibition and did a number of designs starting form some of the Katagami prints. 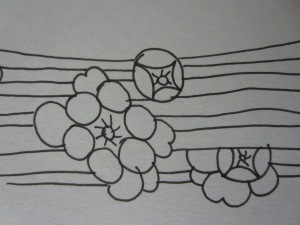 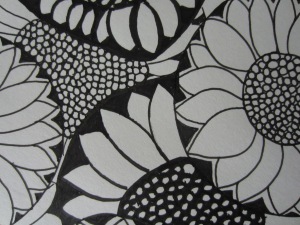 Having looked through everything, I decided to return to the drawings I completed in exercises 1-3, as I would like to develop them further with the view to later using them to create some mixed media work as they lend themselves both to print and stitch.

Looking at the sketches, I would like to pull out some of the strong shapes in the leaves and stalks and develop into collage initially. The textures lend themselves to both stitch and lino cut techniques. I would also like to experiment with silk painting.