October 26, 2014 · by mycreativeartsjourney · in Printmaking 1 Part One · Leave a comment

Having sorted through my acrylic paints and block printing inks and purchased a new roller with a wooden handle (rather more pricey than I had expected), I set out my printing area in the utility room. Perfect space, away from the hustle and bustle in the main living areas of the house, access to sink and long worktop plus an folding washing airer which I thought could be useful in laying out my prints to dry. I found two Ikea glass shelves, never used and with bevelled edges, which I thought would be ideal for printing and mixing plates. I also found a smaller acrylic plate, another printing plate.

I decided to start with some cheaper acrylic paints which I already had, to which I added some acrylic medium to prevent it drying too quickly. I had a large amount of old headed paper to experiment on plus some brown packing paper from Amazon purchases which I thought could be recycled in my printing experiments.

I started off using the primary colours and had fun splurging paint on the printing plate using different sized brushes and chopsticks, making a variety of marks. The paint when on quite thickly and I was able to get two or three prints, often preferring the ghost prints as they had more interesting marks.  I tried adding colour but found this resulted in muddy colours and splurges of paint. I found it better to mix the paint and decided that if I wanted to add other colours it would be better to let the prints dry before adding further colours on the top. Something to try later? I used a range of tools to make marks but found the brush handle/chopstick least satisfactory as the paint, preferring to use a scraping technique with a flat spatula or dabbing with a small wooden splint.

The experiments worked as expected but I wasn’t happy with the colours I had chosen so I went on to use some more natural colours in block printing ink.  I didn’t find much a difference in the way the inks took but lied the results better. I played about with patterns of marks using the same implements, with the addition of a cork. The results reminded me a little of a bark painting I have! I had to get it out to compare!  Well the colours were similar!  Later on, I would like to try some mono printing bases on some of the marks in the bark painting. 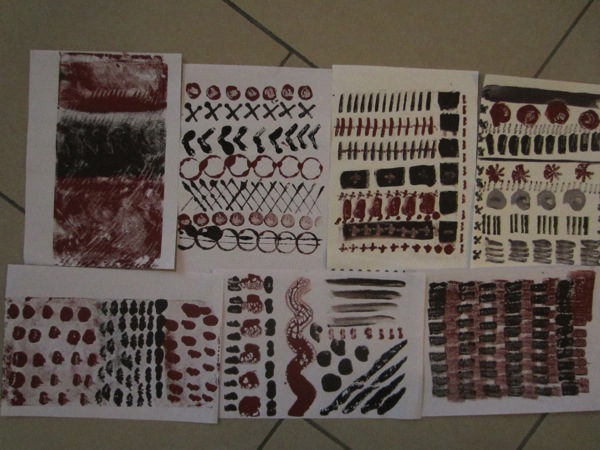