My last printing sessions left me frustrated as I had ideas in my head of what I wanted to end up with but I found it difficult to bring all the elements of the prints together to create a pleasing result. I went through so much ink and paint, all by best paper and all the clearing up after each printmaking session was getting me down.  I almost gave up but after a break of 4 weeks or so during which I did some drawing courses, I began to feel inspired again to restart the final project.

I brought out all my sketches, plans and printing experiments so far for project 4 and laid them out on the floor and pinned pieces I liked best on the wall. With a clearer head, I decided that I was trying to ‘run before I could walk’ and as I was only just starting out in printing, perhaps simple was best. I reassessed each project and decided to a) concentrate on only one subject at a time and complete each one before going on to the next  and b) to simplify each print to only 2 techniques but concentrate on clear prints, which are visually appealing.

I liked this rollered background of the sky which when looked at upside down make me think of the sea. 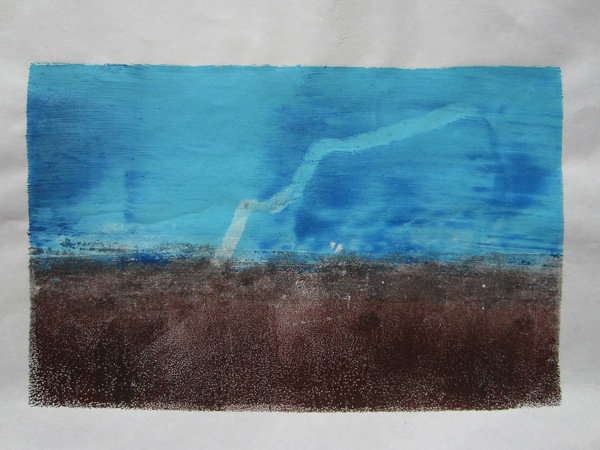 Last September I spent time on lake Como and took lots of photos of the beautiful towns dotted around the lake. I suddenly felt inspired to make a monoprint of Varenna.  I rollered a number of backgrounds in shades of blue and practised painting the houses directly on the printing plate which I then printed onto the backgrounds.

‘Cityscape’ becomes ‘Town on Lake’……. I was very happy with this mono print which though very simple, captured the feel of the water and pretty houses reflected in the lake.

Having reassessed my subject, I decided to concentrate instead on one figure silhouetted in a doorway. I planned to mask out the doorway, creating a brick-effect textured arch with a figure printed using a positive mask in black, standing in the doorway. I wanted to add texture to the arch by wiping and scratching the ink to look like graffiti. I looked through my photos but in the end settled on some free clip art from the internet which I then printed out on acetate and cut out. I decided to use acetate as I had a lot of trouble previously with my paper masks tearing or sticking to the background. I thought the acetate would be better. The acetate was stronger but I found that I couldn’t get a clear print so ended up making a new mask with card which worked better. 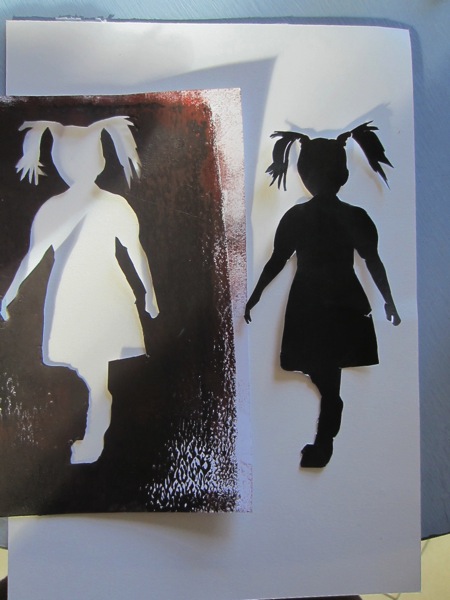 I liked the background but the print of the girl made using the acetate mask was far too weak.

Again, happy with the arch but the girls ponytail broke off and the print still not strong enough.

and another pleasing arch ruined by poor print of girl! 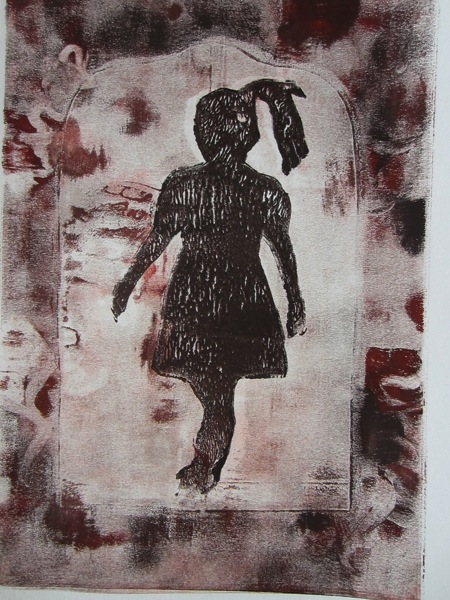 A change of mask, change of paper and at last the print I wanted….!

Continuing with my still life of vases, I changed the colour and ink and quite liked the textured effect of this ghost print although the print wasn’t strong enough

This one I liked even more. I do tend to prefer ghost prints but I think that it was the scratchy lines that appealed in this case. I decided to rethink the composition and make the print using back drawing on a textured, masked background.

Masked background before back drawing

Backdrawing but too dark and blurred… 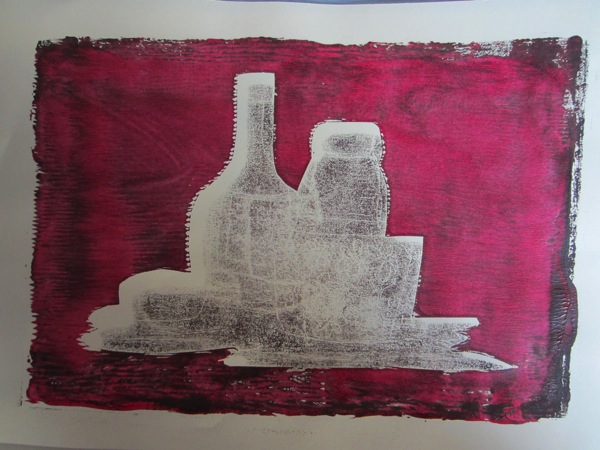 More experiments – all different and none exactly as I wanted but decided to stop and hand in last one…. 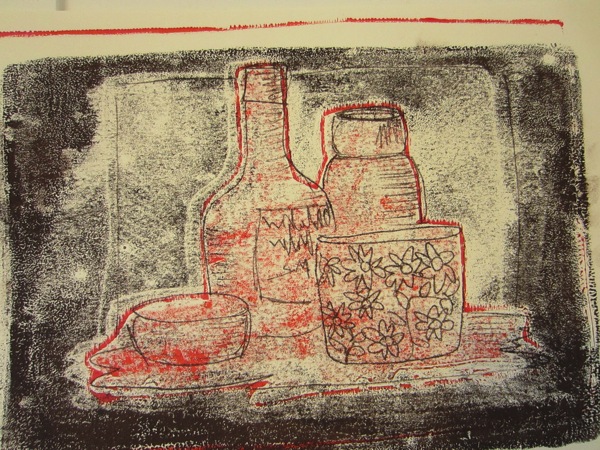 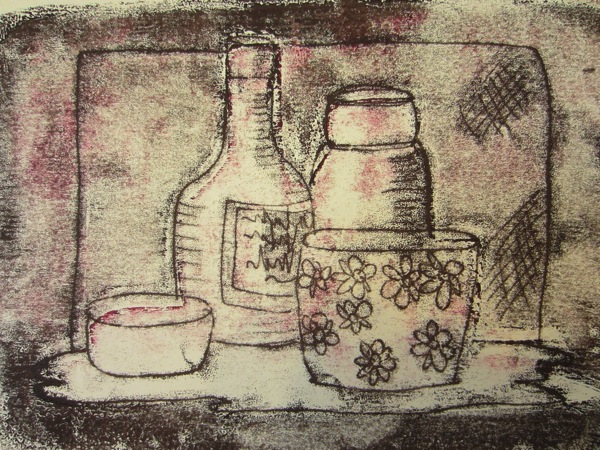 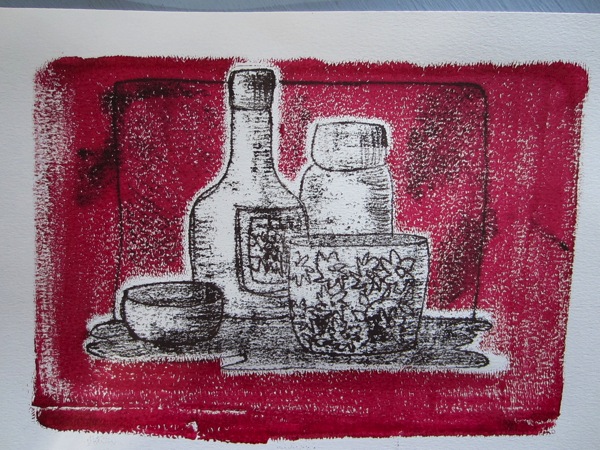 Getting back to my abstract idea. Time was running short but I made lots of textured backgrounds, cut masks and added layers using the positive masks until I made a print I liked!

This last print worked as I intended. I started off with a negative mask of the two shapes and rollered and textured the background by scratching into the ink and impressing it with cotton reels and ends of paper tubes.  I then added gold paint using the positive mask. I tried to give the impression of ancient text. Th ephors doesn’t show it clearly but i really liked the almost leathery texture of the mid-brown ink and the way the light catches the gold paint.